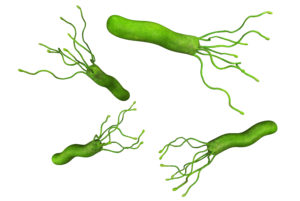 Over half the global population has been infected with H. pylori, the most widespread bacterial infection in the world (1, 2). Even in developed countries, where overall infection levels have been declining, physicians encounter high prevalence rates, which are even greater among immigrant and economically disadvantaged patients. Serology testing is a common way to detect H. pylori antibodies, but as patients can remain seropositive for many years following an infection, are not useful in determining current disease. How then can diagnosis and treatment decisions be made?

H. pylori is typically acquired in childhood. If left untreated, it persists and remains transmissible for the lifetime of the patient (3, 4). Prevalence rates increase with age, but lower rates of H. pylori infection in children reflects recent improvements in control and transmission in the young. Transmission between family members is frequent (1, 4), with grandparents a common, unsuspecting source of infection (5).

Symptoms of H. pylori infection initially include pain in the stomach or upper abdomen. The bacteria penetrate the protective gastric mucous to trigger irritation, neutrophil invasion, and inflammation of the gastric surface, leading to gastritis (6). It is not known what portion of exposed individuals escape or suppress active inflammation, but for those with persistent colonization, gastritis and acid secretion set the stage for further complications (7).

In 10-20% of infected patients, chronic and active inflammation lead to the subsequent development of peptic ulcers (6). For patients with intact acid secretion, H. pylori will be more abundant and tissue inflammation more prominent in the gastric antrum with fewer bacteria and less inflammation in the corpus (6). These patients are more likely to develop antral and duodenal ulcers. Previously, H. pylori infection was responsible for 90% of duodenal ulcers and 80% of gastric ulcers (1). Currently, in developed countries, although H. pylori infections are decreasing, an increasing portion of peptic ulcer disease is linked to use of non-steroidal anti-inflammatory drugs (NSAIDs) (1, 8). Patients who are considering long-term NSAID therapy should be tested for H. pylori infection, as the combination further increases the risk of ulcer development (9). This changing incidence emphasizes the importance of correct diagnosis of dyspepsia and ulcerations to differentiate disease caused by drugs from disease caused by H. pylori infection.

Patients with low acid secretion, notably those taking proton pump inhibitors (PPIs), can develop gastritis throughout the stomach, with ulcers occurring where inflammation is most severe (6). Complications of ulcers are serious, including bleeding, perforation, and strictures. If bleeding ulcers are caused by H. pylori, there is a high risk of recurrence; antibiotic therapy to eradicate the bacteria is usually successful and reduces this risk (6). When low acid secretion allows inflammation to remain chronically active, patients can develop metaplasia and, eventually, inflammation-induced gastric cancers. Atrophic gastritis is a precursor to gastric cancer and decreases acid secretion even further (10).

General H. pylori infection is associated with a 2-3 fold increased risk of gastric cancer or mucosal associated-lymphoid-type (MALT) lymphoma (1). Stomach cancers were previously a common type of cancer in the United States. In parallel with the decreasing incidence of H. pylori infections, stomach cancers have declined and are estimated to be the 15th most common cancer in the USA. Nevertheless, 5-year overall survival rates are only 31% and 10,800 people in the USA and over 700,000 people globally die from stomach cancer annually (1, 9, 11). For the 35% of patients who have metastatic disease, the relative 5-year survival is only 5% (11). Because H. pylori colonization is the single biggest risk factor for stomach cancer (1) and because the bacteria are classified as a Class I carcinogen, diagnosis of infection is clinically important.

The ability to treat and cure H. pylori infections with antibiotics has revolutionized clinical care of patients and reversed long-standing disease trends. Improving what had been a life-long, deteriorating condition, eradication of H. pylori decreases inflammation, and if therapy is given before atrophic changes occur, even the risk of cancer can be virtually abolished (10). 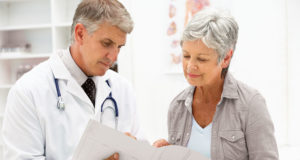 There are multiple therapies that can be successful (12). Triple therapy is widely used and consists of a PPI, amoxicillin and clarithromycin for 10-14 days (9). Sequential therapy utilizes amoxicillin plus a PPI for the first 5 days then moves to a triple therapy of a PPI and two antibiotics, such as clarithromycin and tinidazole (9). Eradication of H. pylori is becoming more difficult due to increasing resistance of H. pylori strains to clarithromycin, making these treatments less effective (13). Recent studies show that clarithromycin resistance is 32% in the USA and 50% in Japan (4), while metronidazole resistance in Africa is over 90% (9). As a result, the AGC 2017 Guidelines suggest using treatment regimens without clarithromycin if local resistance rates exceed 20% (3). This resistance has led to development of a quadruple therapy that uses a PPI, a bismuth product and antibiotics such as metronidazole and tetracycline for 10-14 days (9). However, for H. pylori-infected patients who are pregnant, bismuth, tetracycline and fluoroquinolones are potential teratogens and should be avoided (9).

Because of antibiotic resistance, attempts to eliminate H. pylori with these regimens have increasing failure rates and eradication can no longer be assumed. Elimination of the bacteria should be confirmed 4 weeks after the treatment is finished, using a test such as a stool antigen assay, rather than a serology test (antibodies to H. pylori are formed within 3 weeks post-infection) (9). Guidelines recommend follow-up testing four weeks post-treatment as this time-frame allows any surviving H. pylori to re-grow to detectable levels (3).

Multiple professional gastroenterology groups have endorsed a “Test-Treat-Test” approach that involves first using a non-invasive diagnostic test to determine if a patient with dyspepsia is infected with H. pylori, treatment if infection is present, then follow-up testing to confirm removal of the bacteria (3, 7, 12). For patients this prevents the expense, inconvenience, and discomfort of endoscopy. For physicians, diagnosis can be rapid, and therapy initiated with confidence.

H. pylori infections and associated symptoms and inflammation can wax and wane. Patients typically seek medical care for troubling symptoms during a period of active inflammation. If H. pylori diagnostic testing is positive, they should receive eradication treatment to prevent worsening disease and to potentially reverse and heal their current lesions. The AGC 2017 Guidelines indicate that if a physician plans to test a patient for H. pylori then the patient should be treated if positive (3). The fundamental decision then, is not whether to treat, but rather what test should be used to diagnose an active infection.

For the physician, endoscopy is the only method that allows visualization of the actual gastric or duodenal lesions and their location within the stomach. Sites where inflammation is found are associated with increased risks for gastritis, ulcers, or cancer (6). This knowledge is invaluable for late-stage diagnosis. However, for H. pylori detection, other types of tests are less expensive and more convenient for both patient and physician, and do not require highly trained personnel. The risks of anesthesia and endoscopy are a particular problem for pregnant or pediatric patients and should be avoided when possible (9). 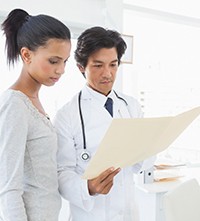 When simpler front-line non-invasive tests indicate that endoscopy would be beneficial, additional information can be gained during the endoscopic exam (9). In addition, patients that have alarm symptoms (vomiting, GI bleeding, weight loss) should be evaluated immediately and directly by endoscopy (3, 9). Biopsies are an important part of the procedure and must be taken from at least 3 sites within the stomach and duodenum because inflamed regions are often patchy (9).

Biopsy samples are used for histology to establish the presence of bacteria in inflamed areas and for rapid urease testing to establish the viability of the bacteria. Cultures, the ultimate confirmation method that the bacteria are alive, can also be made from biopsy specimens if antibiotic sensitivity testing is needed, but require special growth media and take 5-7 days to grow. However, antibiotic treatment within four weeks of the endoscopy (or stool antigen tests) may suppress bacteria to below detectable levels without full eradication. Thus, antibiotics must be avoided prior to these tests to prevent false negative results (9).

Molecular detection of H. pylori DNA is also feasible from biopsy samples. PCR is quite sensitive but cannot determine if the bacterial source of the DNA is viable (9). Rapid urease tests are based on the activity of the urease enzyme of viable H. pylori which will convert urea to ammonia. This is how the bacteria naturally moderate the pH of their locale in the acidic environment of the stomach (6). The combination of endoscopy with histology and rapid urease testing have been used as a reference method for H. pylori diagnosis in the development of more rapid, simpler, non-invasive stool antigen tests (see below).

Antibody testing detects IgG antibodies specific to H. pylori in serum, whole blood, or urine. These antibodies develop about 3 weeks after infection but can persist for years after an infection has resolved (6). For the patient, samples are easy to obtain during an office visit and the test results can be obtained quickly. However, antibody tests provide no clinical information on whether an H. pylori infection is active and the source of current symptoms and thus deserves therapy, or is inactive, with symptoms deriving from another cause that needs investigation. Although serology is a common test for H. pylori, it not accurate for current infections and is of limited utility in areas with a high rate of prevalence, or as a test-of-cure (3, 6). Many labs no longer offer serology testing because of this drawback.

For the assay, the patient drinks 13C- or 14C-labeled urea. The procedure is not recommended for children and pregnant women. If H. pylori is present in the stomach, urease produced by the organism breaks down urea from the gastric juices into ammonia and CO2. The CO2 travels to the lungs and is exhaled. A scintillation cocktail is used to determine the amount of 14CO2 released. Mass spectrometry is used for 13CO2. The test performance of UBTs is comparable to performance observed with invasive procedures. Patients should refrain from the use of proton pump inhibitors, antibiotics, and bismuth-containing medications for several weeks prior to the use of UBTs (9).

Stool antigen testing is a widely accepted non-invasive and simple option for patient and physician, making it a good frontline tool for diagnosis. The test is specifically designed to identify current infection by detecting antigen(s) that are produced by live H. pylori bacteria and shed into the stool (2). Additionally, stool antigen testing reflects infection from throughout the stomach and duodenum, an advantage over endoscopy (9). Stool antigen tests are simple to perform in small labs or resource-poor regions, involve a sample that can be collected non-invasively, (a particular advantage in children and other sensitive populations), and are economical for patient and clinic. Because of these characteristics, stool tests are a good first choice for initial detection of H. pylori, for confirming success of treatment or eradication therapy, as well as for patients that may need frequent monitoring such as H. pylori-infected pregnant women. 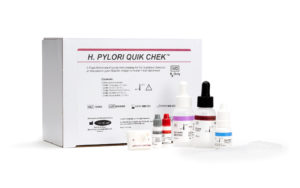 95% Confidence Intervals are shown in parentheses.

Proton pump inhibitors (PPIs), antibiotics or bismuth compounds are known to inhibit H. pylori and may cause false negative results if the patient has used any of these within 14 days of fecal sample collection. If a patient taking any of these medications has a negative test result, the medication(s) should be stopped, and a new fecal sample collected after 14 days. However, for the H. PYLORI CHEK™ and H. PYLORI QUIK CHEK™ tests, if a patient taking these medications does show a positive H. pylori test result, the positive result is considered accurate.

The 2017 ACG Clinical Guideline strongly emphasize a “Test-Treat-Test” approach. This approach is critical because if treatment does not work, the patient will continue to be infected with H. pylori and continue to be at-risk for H. pylori-related disease such as peptic ulcer disease and gastric cancer.

The guidelines enforce the following points:

H. pylori testing should be performed for all patients with active peptic ulcer disease, mucosa-associated lymphoma or early gastric cancer.